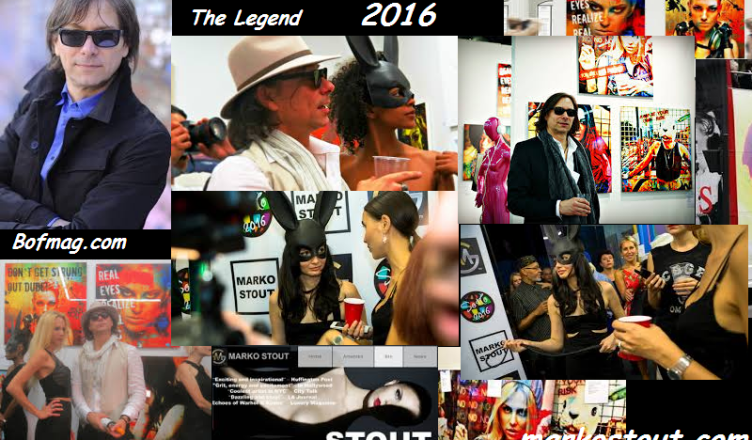 Born 1962 in a turbulent South Africa, Marko Stout’s journey was not the path of a conventional artist. As a young child the Stout family relocated to America, eventually settling in a small summertime resort town along the New Jersey seashore. Upon completing his primary education and influences by the writings of Kerouac, Marko took a year traveling throughout the United States and Europe. Ultimately, returning to the States for his university education, earning degrees in biology and medicine. His early vocation was that of a practicing orthopedic specialist and medical illustrator in New York City, this career was to be short lived, as karma was pushing him toward more creative pursuits. Marko moved to California and developed a passion for painting and the arts while living on San Francisco Bay aboard a houseboat in the bohemian community of Sausalito. In 2005, Marko returned to New York City where he currently lives and creates.

Critically acclaimed New York artist Marko Stout is considered to be on of the most relevant multimedia artist working today!

Marko Stout’s works are windows to the soul and essence of 21st century city life, bursting with urban patterns, rhythms and vigor.

The buzz is growing! Marko Stout has moved beyond New York City and is now featured in Miami, Berlin, London and all over!

Some Amazing Answers By Marko Stout

You were labeled the “quin essential New York artist” by the Huffington Post. Do you think that’s true?
Stout: “Sure, that sounds about right. I mean I like the way that sounds. My art certainly could not exist outside of the city.”

What would you say your style is?
Stout: “Cool”.

Would you consider it Pop Art?
Stout: “I heard it referred to as Industrial Pop. I kind of like that. So, let’s stick with Industrial Pop Art”.

Marko Stout Legend Of The Year 2016